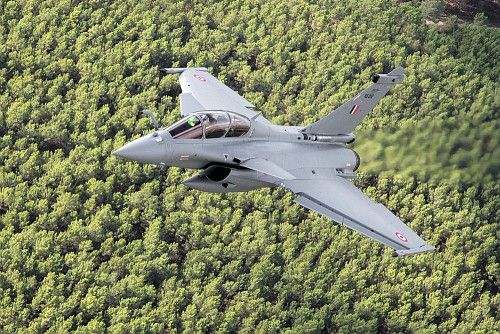 New Delhi: Giving a boost to the Indian defence system, the Indian Air Force on Monday said that the first batch of five Rafale jets is likely to arrive in India by end of July this year. Also Read – Amid India-China Standoff, Ex-Vice Air Chief Says IAF Reactivated Airtstrip in Ladakh Without Informing Government in 2008

Issuing a statement, the IAF said that the aircraft will be inducted at Air Force Station Ambala on 29 July subject to weather. However, the final induction ceremony will be held in second half of August. Also Read – IAF Chief Warns Pakistan, Says Force Ready 24×7 to Strike Terror Camps Across LoC

The IAF further added that its aircrew and ground crew have undergone comprehensive training on how to fly the aircraft, including its highly advanced weapons systems. Post arrival, efforts will focus on operationalisation of the aircraft at the earliest, it said. Also Read – Amid IAF Flypast to Salute COVID-19 Warriors, Doctors Ask For More Safety Measures-PPE Kits Instead of ‘Single-Day Appreciations’

First batch of five Indian Air Force (IAF) Rafale is likely to arrive in India by end July 2020. The aircraft will be inducted at Air Force Station Ambala on 29 July subject to weather. Final induction ceremony will take place in second half of August 20: Indian Air Force pic.twitter.com/rpKoxi3HtO

“The first batch of five Indian Air Force Rafale is likely to arrive in India by end of July. The aircraft will be inducted at Air Force Station Ambala on July 29 subject to weather,” the IAF said.

As per updates, the Rafale jets are likely to be deployed in the Ladakh sector as part of the IAF’s efforts to enhance its operational capabilities along the Line of Actual Control with China in view of the border standoff.

The top commanders of the IAF will take stock of the current operational scenario and deployments at a three-day conference here beginning Wednesday.

India had signed an inter-governmental agreement with France in September 2016 for procurement of 36 Rafale fighter jets at a cost of around Rs 58,000 crore.

The aircraft is capable of carrying a range of potent weapons. European missile maker MBDA’s Meteor beyond visual range air-to-air missile and Scalp cruise missile will be the mainstay of the weapons package of the Rafale jets

Out of 36 Rafale jets, 30 will be fighter jets and six will be trainers. The trainer jets will be twin-seater and they will have almost all the features of the fighter jets.

(With inputs from agencies)