For a long time it was not clear when and whether they would be allowed to open their cult pub again this year. But on July 1st the time had finally come. As the first event location Mallorca Marion Pfaff, known as singer Krümel, and her husband Daniel "Krümels Stadl" were again able to receive guests under strict conditions after the corona lockdown in the popular holiday resort of Paguera. But the long-awaited re-opening went differently than planned.

In the VOX program "Goodbye Germany", the audience could watch on Monday evening how the emigrant couple prepared the location for the reopening. 1.50 meters minimum distance between the tables, reduced number of guests and no party – means: All guests had to remain seated at the table, just clap when performing, but not sing along and put on a mask when going to the toilet. A security employee should also make sure that the guests disinfect their hands before entering the location.

Crowds at the reopening of "Krümels Stadl"

So Krümel hoped that "at least the hundred places will be occupied at all", of which a total of 400 were still available. But things turned out differently: Most of the tables were already occupied an hour after opening. And at a later hour the shop was so full that suddenly the police approached. A neighbor had complained.

Krümel's husband Daniel promised the police officers: "Tomorrow all guests will be seated at tables and chairs. No standing!" But they showed little understanding for it: "My problem is today," said the official. "There wasn't a three-month exit limit for you to do something like that now. It doesn't help us. It's very dangerous, do you understand that?"

The result: The two live acts scheduled for the evening were not allowed to perform and the guests ended at just before two o'clock. The singer now also has an advertisement on her neck. There is also a fine of up to 30,000 euros.

But not only Krümel has trouble with the police. Because of illegal parties at the "Ballermann" Mallorca last week decided to force all restaurants on the "Beer" and "Ham Street", which are especially popular with German tourists. The sin street Puerto Ballena in the British stronghold Magaluf west of Palma is also affected by the forced closings. The order is initially valid for two months. 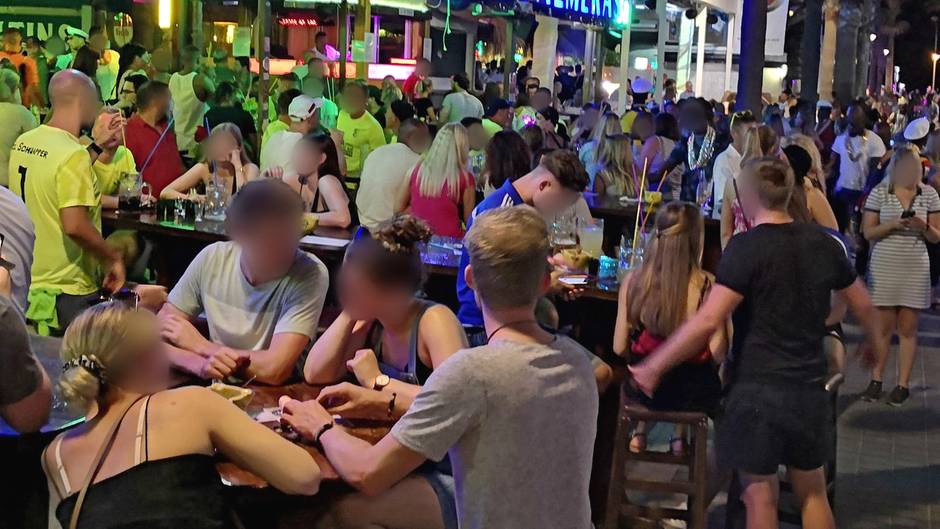 Germans and British had caused "chaos" the penultimate weekend, as the island newspaper "Última Hora" called. Drunk men and women without mouth-to-nose masks, among other things, had hugged, flirted, roared in the crowds of African street vendors – and, as numerous videos showed, did not in the least care about the corona rules.